A freshman member in the 117th Congress, Congresswoman Marie Newman represents Illinois’ 3rd Congressional District, which covers the Southwest Side of Chicago as well as its surrounding suburbs. A lifelong advocate for growing small businesses, protecting health care rights, strengthening our infrastructure and building a greener economy, Congresswoman Newman is the first woman in history to represent Illinois’ 3rd Congressional District in the United States House of Representatives. In Congress, she currently serves on the House Committee on Transportation & Infrastructure, House Committee on Small Business, Congressional Labor Caucus, House Democratic Manufacturing Working Group, Democratic Women’s Caucus and as the Vice Chair of Communications for the Congressional Progressive Caucus (CPC).

Growing up on Chicago’s Southwest Side and suburbs, Congresswoman Newman has been a lifelong resident of Illinois’ 3rd Congressional District. With her dad and uncles all serving the country in the U.S. Army and Marines, she learned at an early age not only the critical importance of public service but also the immense value of lifting up your community and those around you. That’s why when one of her children was severely bullied in school, Congresswoman Newman launched a nationally-recognized non-profit program called “Team Up To Stop Bullying” and worked with state and federal lawmakers to ensure anti-bullying policies became a reality. In addition to serving as a spokesperson for Moms Demand Action Illinois, Congresswoman Newman has used her strong background in advocacy and legislative advocacy over the past decade to grow a statewide coalition to fight for national issues such as health care rights, economic rights, LGBTQ+ rights and common-sense gun safety.

Prior to being elected, Congresswoman Newman worked as a marketing executive and partner at one of the nation’s largest ad agencies before becoming a small business owner herself after launching a successful consulting company. She graduated from the University of Wisconsin thanks in part to her grandfather, a union carpenter, who built a double desk for his grandchildren to study on so they might be among the first in the family to go to college. A reminder of the strength and perseverance of union families and the dignity of hard work, Congresswoman Newman still uses that desk today.

Congresswoman Newman resides in La Grange, Illinois with her husband and two children. 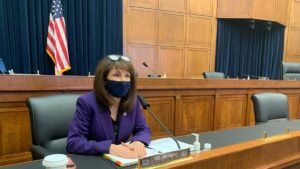 House Committee on Transportation and Infrastructure