On Friday, November 5, Congresswoman Marie Newman voted to pass President Biden’s Infrastructure Investment and Jobs Act to not only create millions of new, good-paying union jobs but also finally make the transportation and infrastructure investments that are desperately needed across our entire nation. 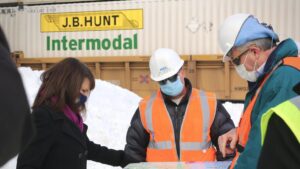 “For decades, Congress has put modernizing our infrastructure on the back burner, resulting in incomplete transit projects, broken roads, eliminated bus routes, and transportation deserts in far too many communities across the country and in my own district. After the passage of President Biden’s historic Infrastructure Investment and Jobs Act, we are changing that by making a once-in-a-lifetime investment to create millions of new, union jobs and bring America’s roads, bridges, transit, rail, drinking water, and wastewater infrastructure into the 21st century,” said Congresswoman Marie Newman. 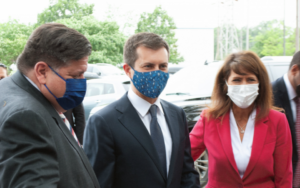 Congresswoman Newman with U.S. Secretary of Transportation Pete Buttigieg and Governor Pritzker on Chicago’s Southwest Side and suburbs.

Congresswoman Newman successfully secured and passed TWO bills as part of the Infrastructure Investment and Jobs Act, these include the following:

Introduced last spring by Congresswoman Newman, the ASAP Act will establish a federal grant program to support transit and commuter rail systems efforts to upgrade stations and facilities to meet or exceed accessibility standards under the Americans with Disabilities Act (ADA). With its inclusion in the bipartisan infrastructure package, our goal to ensure all public transit stations are 100% accessible is now one step closer to reality.

According to the Federal Transit Administration, as of 2019, nearly 20% of all transit stations were not ADA accessible. Modified text from the ASAP Act, which is now included in the bipartisan infrastructure package, would establish a discretionary grant program that supports local transit authority and commuter rail efforts to increase the number of existing accessible stations or facilities that meet or exceed accessibility design standards under the ADA for rapid rail and commuter rail systems. The bill will authorize a total of $1.75 billion over fiscal years 2022-2026 to conduct this accessibility grant program.

Under the legislation, the U.S. Department of Transportation will establish a Rail Research and Development Center of Excellence that will conduct critical research and development to improve the safety, efficiency, and reliability of passenger and freight rail transportation. While the Federal Railroad Administration’s (FRA) current research and development efforts rely on vendors and manufacturers for short-term projects, this legislation will establish funding for a long-term approach. Establishing a Rail Center for Excellence will help FRA and the rail industry advance breakthroughs in passenger and rail worker safety, develop sustainable solutions to address the climate crisis, and build a new generation of rail transportation and engineering professionals.

What will the Infrastructure Investment and Jobs Act bring to Illinois?

Roads and Bridges: $9.8 billion for federal-aid highway projects and $1.4 billion for bridge replacement and repairs. Additionally, the state will be eligible for billions more in competitive grant programs.

Public Transportation: $4 billion over five years to improve public transportation options across the state. The state will be eligible for billions more in competitive grant programs.

Broadband: A minimum allocation of $100 million to help provide broadband coverage across the state, including providing access to the at least 228,000 Illinoisans who currently lack it. 2,926,000 Illinoisans, or 23%, will be eligible for the Affordable Connectivity Benefit, which will help low-income families afford internet access.

Electric vehicles: $149 million over five years to support the expansion of an electric vehicle (EV) charging network in the state. Illinois is eligible for $2.5 billion in competitive EV charging grants.